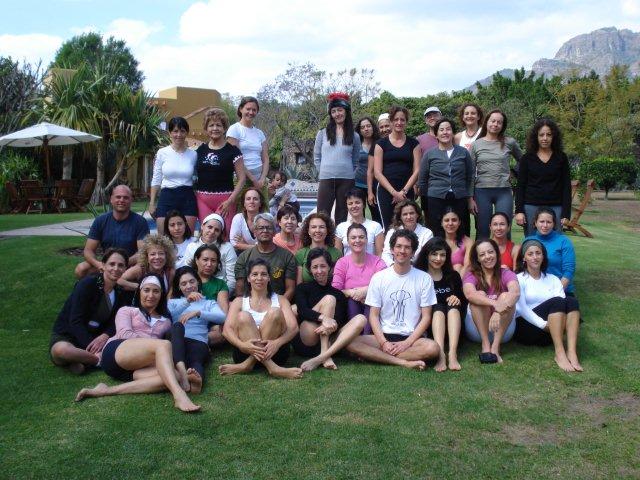 Nowadays, Iyengar Yoga is practiced in more than 60 countries and we are very proud to say that Mexico is one of them.
Mexico is also one of the 8 countries in all Latin America where Iyengar yoga is being taught. It was introduced in 1982 by Herta Rogg and it became last year – with Guruji’s approval- the first country to officially certify Iyengar Yoga teachers in Latin America.  Under Guruji’s guidance, the first assessment exams took place under Margot Kitchen and a team of Canadian and American senior teachers.  The first assessment exams were in English. This year for the first time, Jose Maria Vigar from Spain joined the team and the exams were carried out in Spanish instead.
In January 2008, efforts led by Indira Lopez- Bassols , brought Jawahar for the first time to Mexico.
After attending one of Jawahar’s workshops in London’s IYIMV, Indira asked him if he would come to Mexico to teach. He agreed but requested Guruji’s seal of approval first.
It took more than 2 years to get everything in place; lots of people were involved, and significant transatlantic efforts took place to make this possible. To add a bit of flavor and suspense to his trip, Jawahar received his visa 3 days before he was due to travel. Too many aspects had to be correctly positioned, like constructing an asana, to make his visit possible.
A weekend workshop was organized at the recently inaugurated Iyengar Yoga Centre in Mexico City, two Bellur Fund raising sessions during the week and a 4 day long residential retreat in the valley of Tepoztlan.

All the workshops were sold out weeks in advance. The groups consisted of 30 to 50 participants with many on the waiting list. This reflects the growing interest in the Iyengar Yoga method in Latin America. Even though all workshops were taught in English, some simultaneous translation in Spanish did take place.
The students were eager to learn Iyengar Yoga and the different nuances of the subject. The keenness of the students was infectious and each asana was done to their personal satisfaction. Only then was the next asana approached.
We understood also the importance of proper clothing and grooming so that there is no distraction/interference in the learning of the subject of Iyengar Yoga. As the class progressed, we learnt the importance of connecting one asana to the other and maintaining the underlying principles. The class was introduced to the use of props to balance the kosha and inter-penetrate the layers with stability.
A great deal of rope work was practiced as a request from the Mexican community who are very fond of yoga kurunta.
The students were introduced to a few Yoga Sutra and the emphasis to combine Indian philosophy and asana. The five movements of consciousness (pancha vrttis) play an important part in our asana practice, having yogic or non yogic effect (klishta, aklishta); how correct knowledge is based on 3 kinds of proofs: direct perception (pratyaksha), inference (pramana), and  testimony from sacred scriptures or experienced persons (agamah).  References were made to the Yama, Niyama, the afflictions (pancha klesha) which disturb the equilibrium of consciousness: lack of wisdom (avidya), ego (asmita), attachment to pleasure (raga), aversion to pain (dvesha) and fear of death (abinivesha).

The Mexicans were enthusiastic about learning Iyengar Yoga and Jawahar appreciated Mexicans’ colorful sense of humor, Latin hospitality and open friendliness.
As students showed a great interest in all his teachings, Jawahar showed a great interest in the pre-Colombian culture.
We had an opportunity to visit Teotihuacan, capital of the Aztec Empire (AD300 to AD750), about 30min from Mexico City housing the Pyramids of the Sun and the Moon; the Templo Mayor (Teocalli) below the cathedral in Mexico City, the spiritual and ceremonial heart of Tenochtitlan.
He too visited the National Anthropological Museum with Mexican students that offered to accompany him.
Jawahar, subject to Guruji’s acceptance has agreed to return to Mexico in January 2009.
For me, a Colombian living in London, who took part in the workshop, I felt very proud to work with Jawahar, with a Mexican group in Latin America.
Although there is still much to do to spread Iyengar yoga all across the remote areas in Latin America, Mexico is a good example of how with combined efforts everything is possible.
We have much to do to spread the knowledge of Iyengar yoga in Latin America, initial steps have been taken and we are very proud to say that Mexico is now another part of the world that practices Iyengar Yoga.  We hope that in the near future there will be more Spanish speaking teachers involved, so that Iyengar Yoga is not limited to only English speaking students in Latin America (which are obviously a minority).
We would like to thank Jawahar, for his teaching, Guruji for his approval, Alicia Ramos from the Iyengar Yoga Centre in Mexico and all the Mexican students who participated in making this dream a reality.